At times life can seem like everything is going against you. Everything is seemingly falling apart no matter how hard you try to keep it together. It’s like holding sand in the palm of your hand and watching the grains slip through your finger, regardless of your effort to hang on to them. In fact, sometimes you may even wonder if you have been cursed like Sisyphus, as life seems to be a constant uphill climb. For those not familiar with Sisyphus, he was a king who was punished for deceitfulness by pushing a stone uphill. The issue with pushing a boulder up a hill is that whenever it reaches the top, it would roll down and he would constantly be doing the same thing. These circumstances only lead to frustration which results in you feeling like you are the only one that has to undergo what you are going through.  However, I come to remind you that you are not and that everything is going to be ok.

Maybe you did not hear me so I will repeat: 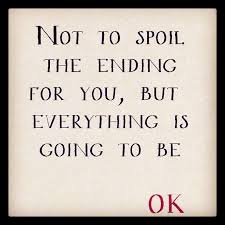 There was a man in the Bible called Jacob. He was not known for doing everything right. As a matter of fact, his name described his nature – trickster, deceiver. There was a point in his life where he also felt like everything thing was going against him. Genesis 42: 36 states “Jacob exclaimed, “You are robbing me of my children! Joseph is gone! Simeon is gone! And now you want to take Benjamin, too. Everything is going against me!” At this stage in his life, he was old and had lost the love of his life. In addition to losing his love, he lost his favorite child. As if that was not enough he was in need of food as they were experiencing famine in the land. In an effort to survive by acquiring food in a country nearby he lost another son and the only way he could get back that son was to send the only child that the love of his life left behind.  This was evidently more than Jacob could bear. He expressed in his anguish that “everything was going against him.” Little did he know, however, that it was a setup. It was a setup for him to be blessed beyond his expectation. Long story short – he was able to die of a good old age happy seeing all his children and even pronouncing a blessing on both his children and grandchildren.

Just like Jacob, you may feel currently that everything is going against you. Nevertheless, I am here to declare to you that it is only a setup for you to be blessed beyond what you could ever ask or think.  As Henry Ford says, the “airplane takes off against the wind, not with it.” It is time for you to take off! The runway has been cleared, and all the setbacks were just fuel for your great launch. Get yourself together! Stop crying over what was lost! Stop pinning over what was stolen! Pick yourself up! You have been released for takeoff!  This is your moment to shine! Your worst days are behind you and your best days are before! Step into your season! It is your time to FLY!!

7 thoughts on “Everything Going Against”